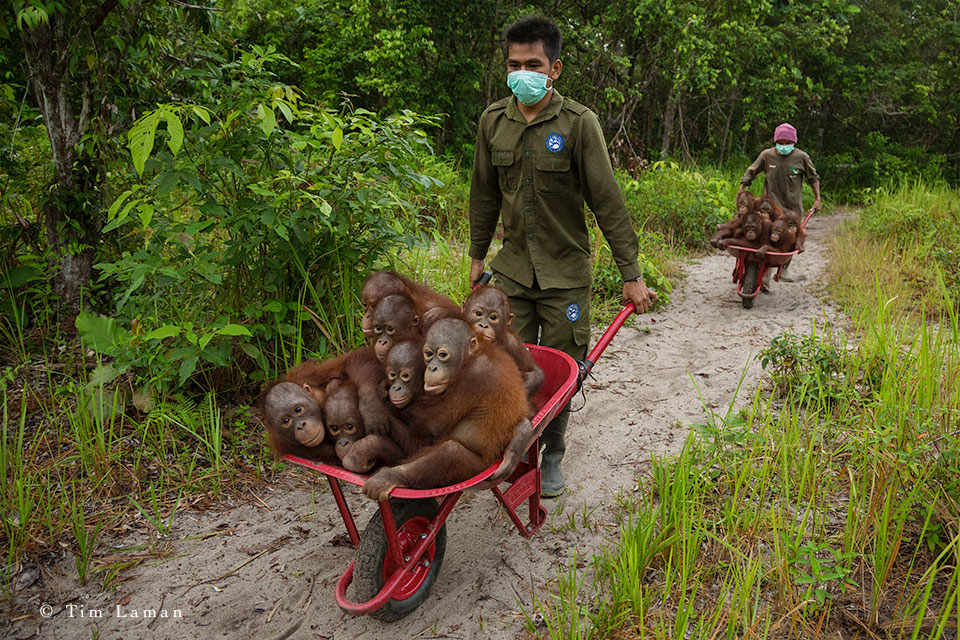 The award is given for a story told in just six images, which are judged on their story-telling power as a whole as well as their individual quality.

While the forest still stands.

For orangutans to survive as a wild species – retaining their vast culturally transmitted knowledge of how to survive in the rainforest – the priority is to protect what remains of that forest. But with the majority of orangutans in Indonesian Borneo (Kalimantan) living outside any protected area, and with ever-increasing loss of forest to oil-palm plantations, pulpwood concessions, slash‑and-burn farming and huge fires, that’s a major challenge. The accelerating loss of orangutans – whole populations with distinct cultures – is part of a bigger story of corporate expansion with lax enforcement of the law and environmental consequences that affect local people. For Tim Laman, the challenge is to reveal glimpses of the lives and culture of truly wild orangutans – something no one else has done – while also reporting on the unfolding tragedy. 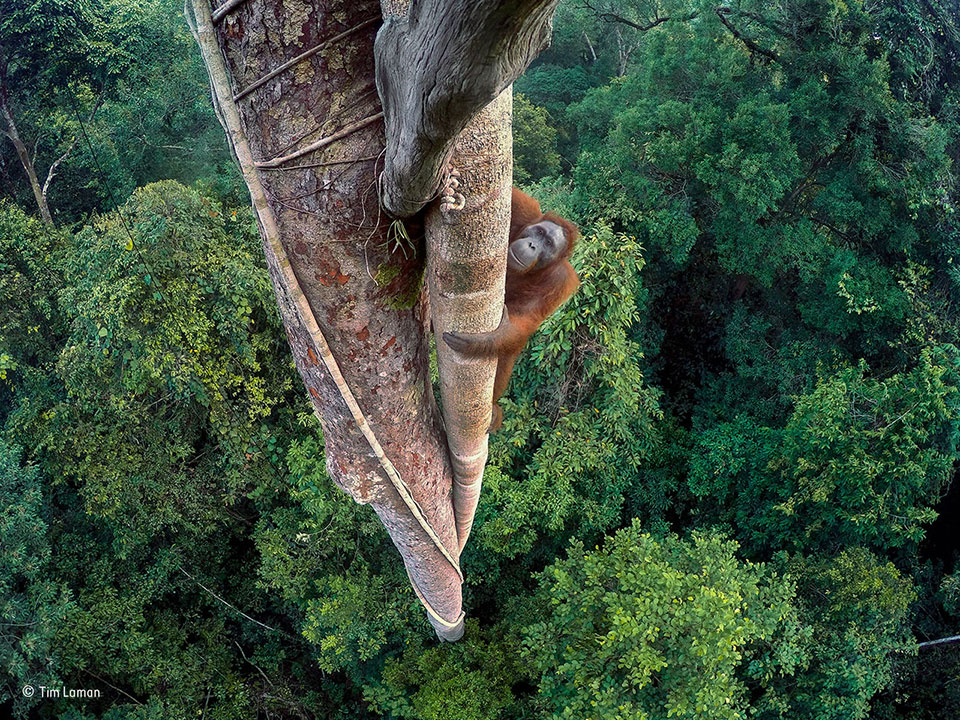 There’s usually a fig tree fruiting somewhere, even when other fruit is scarce. This makes figs a vital back-up food for orangutans, which in turn disperse their seeds. Of the more than 50 fig species in West Kalimantan’s Gunung Palung National Park, about 20 are ‘strangler figs’; these germinate in the canopy of a host tree and wrap their roots downwards. Orangutans make mental maps of where and when to find fruiting trees. But they often travel along interconnecting branches, which can make it difficult to predict where orangutans will be. Unusually, this 30‑metre (100-foot) tree had only one access route: the strangler fig ‘ladder’ around its trunk. Tim spent three days rigging cameras on the tree, guessing that the young male orangutan he’d seen feeding the­re would return. As the ape shimmied up the root, Tim made an image he’d long dreamed of, combining a unique perspective and a wide‑angle view to highlight the relationship between the orangutan and its forest. 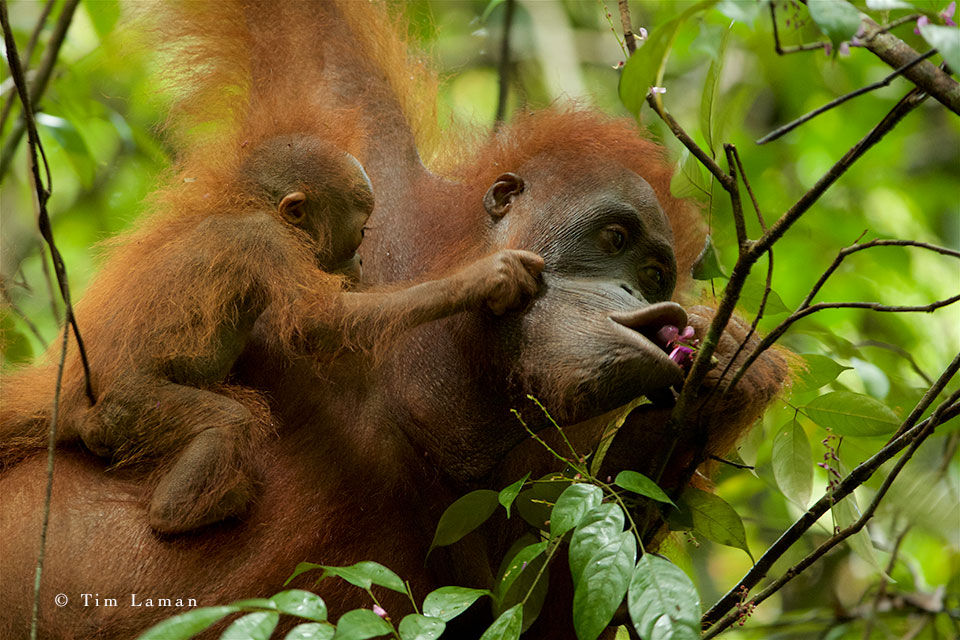 Generally, orangutans are solitary, but they will spend time together when their paths cross in the rainforest – moments of intense social activity and, possibly, of information exchange. For young ones, it’s their mothers who are the main source of knowledge. Tim spent three weeks – all day, every day – following this Bornean orangutan and her month-old baby in Gunung Palung National Park, West Kalimantan. He’d known her since she was a baby herself, and though she was wild, she was also used to being followed. He wanted to show how intensely curious youngsters are – in this case, trying to see the Fordia flowers her mother is eating. Youngsters stay with their mothers for more than ten years, and so this infant should have time to pick up the way her mother does things. ‘For orangutans to retain their vast knowledge of how to survive in the rainforest, it’s vital that the different populations with their different cultures are protected in the wild,’ says Tim. 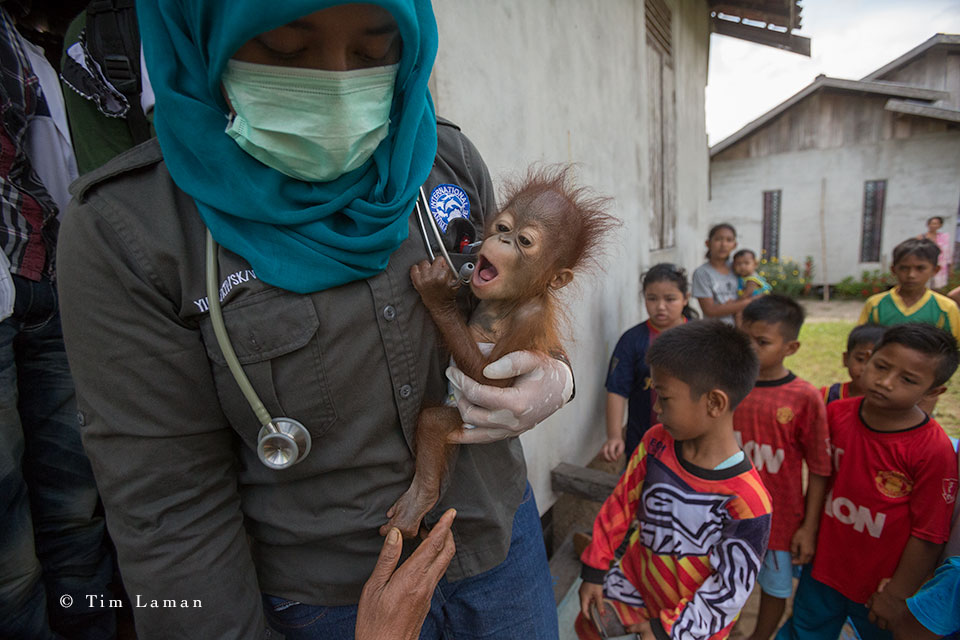 When forest fires swept through Borneo in 2015, orangutans that were driven from the forest and into oil-palm plantations and settlements came into conflict with people. If females are killed, usually because of forest clearance, their babies are kept illegally as pets or sold on. This month-old orphan, kept as a pet in a village in West Kalimantan, was reported to the authorities. Here it is being confiscated by Dr Ayu, a vet from International Animal Rescue, to be taken to a rehabilitation centre. She is wearing a mask to prevent passing on any disease to the baby, which is trying to latch on to her stethoscope. In the wild, infants suckle for four or five years, and the average time between offspring is seven to eight years – longer than for any other mammal. So though this infant will be cared for, it will be difficult for it to learn all the skills needed to survive in the wild, skills it would normally learn from its mother. 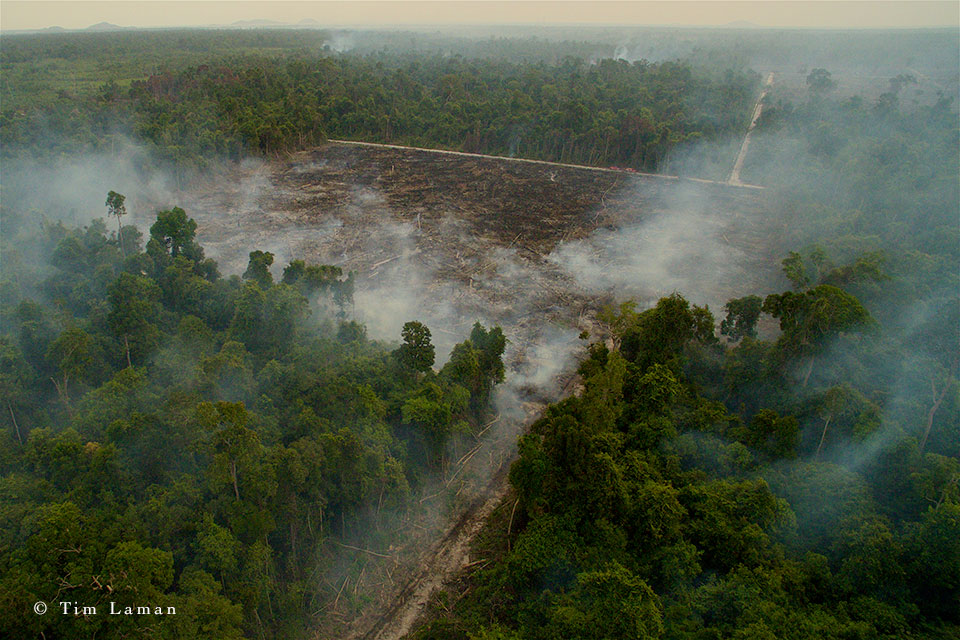 In Indonesian Borneo and Sumatra, the El Niño weather event turned the 2015 dry season into a drought, and extensive fires spiralled out of control, sending heat and smoke across the region. Orangutan habitats within protected reserves, as well as those outside, were decimated, as more than 21,000 square kilometres (8,110 square miles) of forest burned. Tim used a drone to explore the forest destruction in the buffer zone around Gunung Palung National Park, West Kalimantan. The forest had probably been burned to clear space for planting oil palms to produce palm oil, an export crop. And it is rainforest clearance for oil palms that continues to destroy habitat for orangutans. ‘Every single one of the thousands of fires that tore through Sumatra and Borneo last year was started by people – mostly deliberately. Every single one could have been prevented through education, better fire control, better law enforcement and will,’ says Tim. 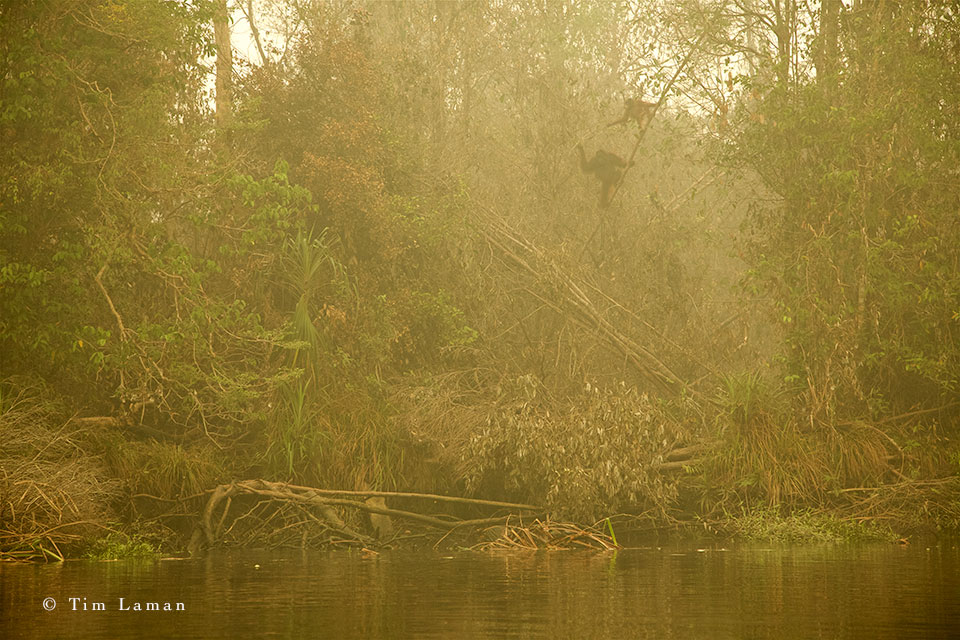 On the riverbank, an orangutan and her youngster seek refuge from the burning forest. Tim photographed them through thick smoke from a boat on the Mangkutup River in Central Kalimantan, Indonesian Borneo. Though he wore a face mask throughout his time in the region, he suffered lung irritation for weeks after. The fires that affected much of Indonesia in 2015 damaged or destroyed vast tracts of habitat, putting the critically endangered Bornean orangutans and the even-rarer Sumatran orangutans (population 6,600) in an ever more precarious situation. In some areas, the peaty soil of the forest ignited and burned for days or weeks. The heat and disruption drove large numbers of orangutans out of the forest, increasing their conflict with humans. Meanwhile others are gradually starving, trapped in pockets of forest that have been reduced in size through clearance for oil palms and are already too small to support them.

End of the line?

Rescue centres such as this one at the International Animal Rescue facility in Ketapang, West Kalimantan, in Indonesian Borneo, reported a huge influx of orphan orangutans as a result of the fires in 2015. The caretakers do a magnificent job, here taking a barrow-full of one- and two-year-old Bornean orangutans to play in the forest, where they will learn some of the basic skills of survival. Each orangutan represents a female killed by poachers. The loss of these mature females has a devastating impact on wild populations, and so each youngster also symbolizes loss of future generations. These infants are lucky to be alive. Their chances of ever living wild again are remote – of the thousands of rescued orangutans, only a small proportion have ever been released successfully. Captivity may save individuals, even preserve gene pools, but these babies lack the cultural knowledge they should have gained from their mothers. Without that, even if they can go back to the forest, their survival is uncertain.

All images and text reproduced with permission of the Natural History Museum. All images are Copyright ©Tim Laman.[/su_box]