From Dawn to Dusk in Xian 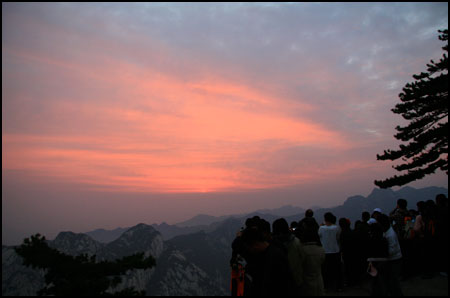 It has been more than three years ago when I christened my Canon 30D near where Qinshihuang unified China a few millennia ago. Flying in from Hong Kong with Kim, an Aussie mate of mine, we landed and headed out to see the city of Xian. Starting at the Muslim quarter, goods that have been traded along the Silk Roads for generations were on display alongside modern day-to-day household goods. Upon a closer look at stands offering dried fruits and dates, to my surprise, I also saw dried kiwifruit.

Thinking that these may have been imported from New Zealand and dried to fit local taste buds, I found out that I could not have been more wrong. I did not realise that kiwifruit is native to Southern China, and are known locally as the mihou tao (macaque peach). The fruit was initially called Chinese Gooseberry by New Zealanders, and were only renamed as kiwifruit for commercial exporting purposes in the 1950’s.

The next morning, we set off to see the first emperor of China’s immortal army of Terracotta warriors and horses. Excavation continues to this day after the first terracotta figure was discovered by local farmers east of Xian in 1974. Every warrior figure is said to be unique, where no two look alike, and though they have been dated back to 210 B.C., to this day, they continue to stand guard near the site where Qinshihuang’s mausoleum remains undisturbed. My mind flashes back to the images of a movie, where Zhang Yimou played a soldier with eternal life and was encased alive in clay as he was sentenced to death by the Emperor for falling in love with Gong Li’s character. Indeed, these terracotta warriors are standing in silence in their earthly grave pits dug out as part of the excavation, and at a safe distance away from the touring crowds, but in thousands and thousands they stand, representing a China united by one man’s vision, ambition and tyranny.

We walked around the city centre after dinner and came to the Gulou (Drum Tower), where it was lit in all its golden glory. A stone’s throw away is the Zhonglou (Bell Tower) which is the centre of ancient China, where the north/south and east/west axes extended from. These two buildings

were erected in the 14th century and that night played host to beautifully lit strings of kites flown from the square between the two towers. Older ladies will attempt to sell these local trinkets to every foreign-looking individual – having a large camera was a dead giveaway – and from experience, I suggest asking for a demonstration to make sure you have not bought a dud.

The next morning, we took a ride on the local version of a tuk-tuk and got to the central train station and hopped on to the first train to Hua Shan, one of the five sacred Taoist mountains in China. We jumped onto the first carriage which looked like it had room, and landed in the carriage-way.

Over the two-and-a-half-hour journey standing next to the toilet, we’ve come to realise that the space doubled as a smoking area and somehow five trolleys (three for food, one for drinks and one for magazines) managed to squeeze through between the crowds. For about one Euro, this was quite a ride – the squabbling guards and cooks pushing the trolleys were decidedly chirpier when they saw me snapping photos and a cook asked if I could take a photo of him, only to be told off by one of the guards that he was not “pretty enough.” I couldn’t help letting out an audible laugh as they moved along and went about their chores.

After a short bus ride and cable car trip up very steep hills, we hiked up to a hilltop inn just in time as darkness descended. In the morning before light, we hiked out with our torchlights and found a corner at a vantage point the earlier crowds had not staked out. The arrival of dawn was dramatic as the colours streamed out between the clouds – but it was not meant to be as the clouds overwhelmed the sunrise.

As we hiked along paths and climbed up hills assisted by iron chains (as some hills were over 70 to 80-degrees steep), we meandered through a couple of the five mountain peaks and seeing them again from afar, finally understood where the Chinese painters drew their inspirations from.

The majestic mountain ranges were over 2,000 metres high and golden locks adorned the iron chains as did red ropes, as visiting hikers locked-in their hopes and wishes for a safe return downhill and for good health. Locals seemed to run down the many steep and narrow steps, whilst others hiked up and down the mountains every day for 8-hours just to deliver the food and water to stock the kitchens uphill.

We got downhill and our calf muscles were on the verge of spasms. After a dip into a pool with cool waters (big mistake as the muscles seized up more) by the last kilometre out to the city by Hua Shan, we reached the town by the foot of the mountain. We had a warm meal before the owner of the restaurant and one of his waiters generously rushed us on the back of their motorcycles to get to the bus back to Xian on time. After a back and foot massage at the local Chinese medicinal shop, we rested before heading out to the ancient city walls the next morning.

Entering through one of the gates, we walked up the city fortifications that were initially built in the Tang dynasty (7th to 10th century) and extended to its current layout in the 14th century. The city walls were restored and further reinforced with brick in the 16th century and later, in the mid-17th century, the walls were fitted with gate towers. We cycled on the city walls and along the way – the massages worked – and noticed rickshaw rides and motorised vans appealed to the those seeking less strenuous options. Xian today is one of the major car production centres of China, and the air was thick with pollution. The dust formed a nostalgic setting as dusk drew near – I could not help myself as I imagined what these walls have held back as battles raged for control over this ancient capital.

As our calf muscles tired for another day ahead, we headed back to the Muslim quarter which swelled with tourists and locals alike as everyone seeked out the odor of grilling lamb. The saxophonist serenaded the crowds as the tables on the streets filled for yet another night.

About Yew Wei: By day, Yew Wei attempts to be a geek at work as he tries to say in English, Bahasa, Mandarin or Cantonese, what the numbers may mean to a myriad of people. At night and weekends, he is planning for his next holiday where the DSLR does come in handy. Born in Malaysia, Yew Wei moved to Melbourne to study and work, before relocating back and forth between Hong Kong and Seoul and now Amsterdam to see a canal or two. Travelling for work around Asia/Pacific has jump-started a hidden adventure-deficiency he is now desperately trying to resolve. The light at the end of the tunnel seems rather distant, but he continues to chase after it as he jumps over the many office desks along the way.