The Comedy Wildlife Photography Awards – the world’s funniest photography competition has just announced the 40 Finalists for 2019 – and they are hilarious! Since its inception World Photo Adventure has supported this great initiative, showing the funny side of what can take place with our partners we share this great planet with. Not only does it give us all a laugh, sometimes just that knowing smile or a nod of the head but it’s all there – the funnier side of life, however it carries a serious message so as we smile or have a good belly laugh at the antics of our friends don’t forget to read the message 🙂 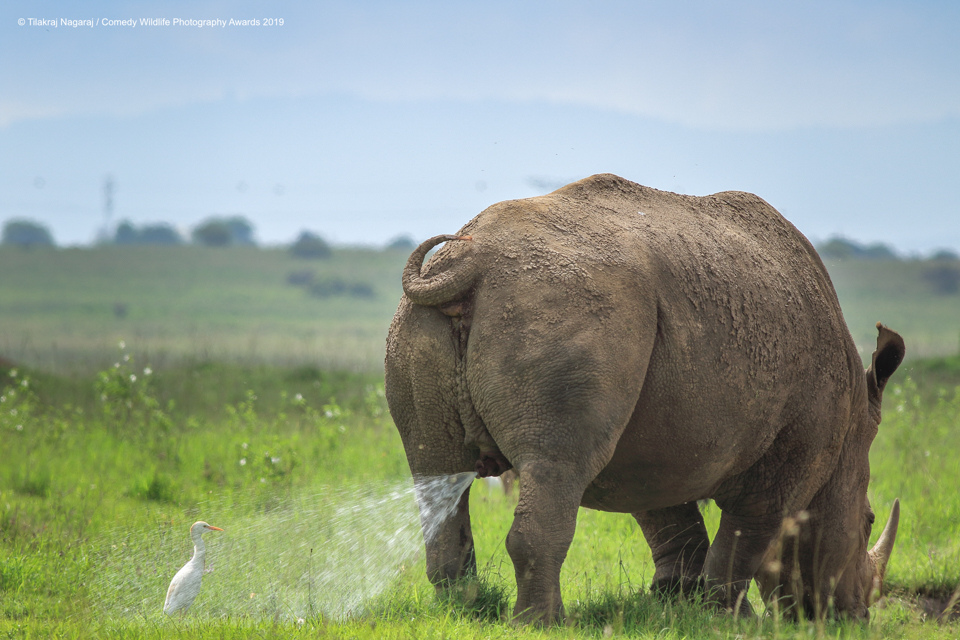 Warning! Territory Marking, follow at your own risk. Description: One beautiful Sunday morning with my family drove to Nairobi National Park. On our way while searching for sighting we came across a group of White Rhinos walking together and grazing. While we were watching them we had just found an Egret behind this rhino following it impatiently. Little did egret knew she would be rewarded with a surprise shower to get her out of the track. Marking Territory is a behavior of territorial mammals which they do it quite often. It was nevertheless funny and a surprise thing for anyone who tries to follow them. Animal: White Rhino, Egret Location of shot: Nairobi National Park, Nairobi, Kenya

This year CWPA are really excited to have a brilliant message, which they are promoting on how be a ‘conservationist at home.’

Yup, this is super easy for everyone to do. For example; don’t buy products which have palm oil, because the palm oil plantations are destroying rainforests. Try and avoid un-recyclable products and one-use plastics/packaging.

Ok, this is the thing, each time you flush the loo we send approx. 20 litres of water down the drain – seriously, it’s crazy. So..have shorter showers, water your garden less and stop flushing the loo every single time.  This would save billions of litres of fresh water that could support our environment as well as supply homes and food for a global plethora of wildlife.

This is a special person who may be not a mega activist, but really, really cares about the environment and wants to do something to help. For more ideas, please go to: www.comedywildlifephoto.com

Family disagreement  They were taken two birds during courtship before nesting. They then have strange poses and often seem to argue between themselves. “A couple of birds have family disagreements. Her husband was stuck for a long time last night with his friends at the inn, so the woman was angry again. He says there was only one drink after the last one.” Animal: Birds Location of shot: Croatia

The competition, founded by Paul Joynson-Hicks and Tom Sullam, both professional photographers and passionate conservationists, is a global, online and free to enter photography competition, showcasing seriously funny images of the earth’s most amazing wildlife.  In addition to providing some light-hearted relief, the competition aims to highlight the extremely important message of wildlife conservation in an engaging and positive way, working with the main competition partner – The Born Free Foundation. 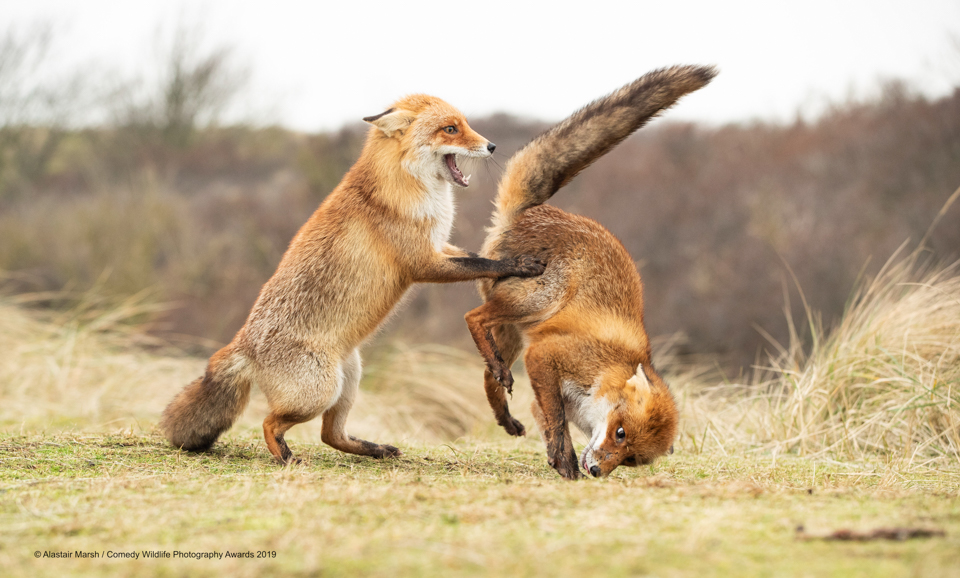 Waltz Gone Wrong I spent a few days at a well known site near Amsterdam in Holland watching and photography foxes. These two females were actually having a scrap with each other, clearly not happy with being close. People keeping saying to me that the series of photos make them look like they’re doing the ‘waltz’ dance. This image always makes me smile given the pose! Animal: Red Fox Location of shot: Amsterdam, Holland

Title: To be or not to be Description: This snow monkey was looking at me when i took this picture and I think that he thought: “what ugly guy!”. He was taking a bath in the hot thermal water while the temperature outside was -15 degrees. Animal: snow monkey (Macaca fustata) Location of shot: Japan

The Comedy Wildlife Photography Awards 2019 Title: Indecent proposal?…. Description: On the Isle of Helgoland, Germany, the script for this story-telling picture was written by the attitude of the gannet, staying in the shade of the other one, who was illuminated by the rising sun (at 05.18 AM)

Some of this year’s top Finalists include a waving Damselfly by Kevin Sawford, a rockin’ Marmot by Martina Gebert and a farting Penguin by Eric Keller.  Something for everyone! The Winners will be announced on 13th November, with the Overall Winner winning an incredible one-week safari with Alex Walker’s Serian in the Masai Mara, Kenya as well as a unique handmade trophy from the Art Garage in Dar es Salaam, Tanzania.

Early mornings are a great time to find damselflies warming up on summer days. I found this individual on the yellow iris flower, as it warmed up it would stretch its legs giving me the opportunity to capture this image of it seemingly waving at me. Animal: Common blue damselfly

The winners will be announced on the 13th November 2019 so enjoy all these lovely hilarious images and don’t forget to place your vote – see below!

Members of the public also get the chance to choose a winner, as once again, Affinity Photo are sponsoring the People’s Choice Award!  For more details on how to vote for your favourite funny pic and to be in with a chance of winning a brand new Ipad – go to The Comedy Wildlife Photography Awards website at www.comedywildlifephoto.com

All images are copyright © Comedy Wildlife Awards and the respective photographers.

There is a brand, new book out soon, The Comedy Wildlife Photography Awards Vol. 3 by Paul Joynson-Hicks and Tom Sullam, published by 535, and available to pre-order here

Featuring all of this year’s Finalists, plus a whole host of hilarious, unseen images from the competition that will have you giggling until Christmas!

We would love to hear what you have to say, please leave a comment. Cancel reply